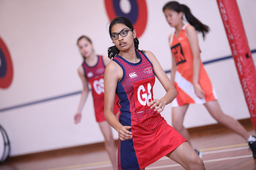 On Saturday, Tanglin hosted our annual SEA Netball tournament. This is the largest sporting event of the year with over 350 participants, coaches and spectators. With 109 fixtures and 27 teams, our Tanglin teams had great fun and gained lots of experience playing against teams from around the region.

Our 19&U Netball A team reached the Cup Final, narrowly losing to Singapore Sports School in a fiercely contested final!

Following the competition, we interviewed team Captains, Holly and Ellie.

How did you and the team prepare for this tournament?

Our team trained three times a week, totalling four hours a week. During these sessions we worked on set plays, specific defensive and offensive tactics, as well as fitness drills. In this way, our team can improve technique and preparedness for our competitive games.

Did players rotate positions on the team?

Positions are rotated at half time for most games in order to ensure that all players gain court time. In this tournament, positions were rotated within the team during the pool stages, however when it came to the semi-final and final, our coach made the executive decision to stick with a 7-side squad that had worked the most effectively that day due to the familiar connections that had been built between the players.

Which teams were you looking out for in the competition?

In the competition we predominantly looked out for three main schools who we viewed as our biggest competitors, namely the Australian International School, UWCSEA Dover and the Singapore Sports School. These schools have proved to be the strongest sides over the previous years and many of our players were familiar with how these teams played and therefore were able to share advice on how we could beat them. We managed to defeat two out of three of these schools, facing the Singapore Sports School in the final where we lost by a mere two points, having drawn at half time.

What did you most look forward to about the competition and why?

As Captains going into the tournament, we were very excited to lead our team by supporting and motivating everyone whenever necessary. I think everyone looked forward to winning some games, but also being able to develop and grow as a player and a team when we faced strong opponents. For four in the team, it was our last SEA Netball tournament and we wanted to end on a high- which we can both confirm happened as it was evident that all team players gave 100% effort.

Are you considering going into Netball as a profession?

All our players are encouraged to continue to play netball after school as much as possible, and if the opportunity is presented to pursue netball as a career, I'm sure many of the team would very much consider it as it is clear everyone in the team has a strong passion for the sport and is more than capable of being able to play at a professional level.

What would you like to say about your experience of captaining the U19 Netball team in your final SEA Netball Tournament?

"Captaining this side in my final tournament representing Tanglin in sport, was extremely rewarding at SEA Netball 2019. As a team, we all performed our absolute best and played some of the finest netball we ever have as a cohort and individually. I am so proud of my team for our efforts throughout the weekend and I feel very lucky to have been a part of netball at Tanglin, during my time at this school." Ellie, Year 13

"I am beyond proud to be part of this U19A Tanglin netball team and to share the captaincy this season has been an even greater privilege. As always, the SEA Netball Tournament is a tough competition with some excellent sports women and players in every team. It has been amazing to represent Tanglin on many occasions over the years and to play in this fantastic SEA Netball tournament which could not happen without the work and dedication of the organisers. I wish the girls next year all the very best." Holly, Year 13