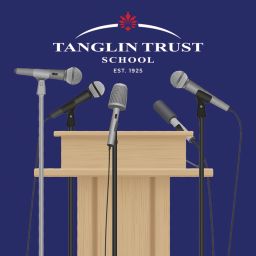 "Debating is a blood sport – an adrenaline-fueled contest of verbal jousting, proposing and opposing stances, and hard-hitting heckling to knock the opponent off-balance." David Sheppard, Debate Coach and member of the Scholars Society Leadership Team.

The battle imagery David evokes might not be the first that springs to mind when we envisage the intellectual activities of Scholars Society, but as he retells the cut and thrust of the recent Raffles U14 Debate Competition – from which Tanglin's young debating team of Rohan Sarma (9.4); Krishiv Kukreja (9.2), Adam Khan (9.4); Jamie Adams (8.5) and Vishnu Deepak (9.2) emerged with a Silver Division victory – it all makes sense.

Likewise, Team Captain Rohan Sarma's review of the competition describes an edge-of-the-seat thriller: "After losing the first two debates, it felt at times like all hope was lost. During the competition, I felt exhilarated and stressed all at once. The two-day competition had its highs and lows, but there were no moments where I wanted to be somewhere else."

The narrative arc that saw this young team go on to win their division after these early setbacks, with three of them placed in the top ten speakers (out of c. 90), is all the more thrilling for the character strengths they brought into play to achieve this goal. As David explains:

"They were really positive going into the third round; still encouraging each other, taking the viewpoint that they even if they didn't win, this was their first competition together and a great learning experience. For me, that was the truly magical moment – realising these children have got real grit and exactly the right attitude to learning and life.

"When they won the third debate, they were ecstatic. In the fourth they gave it their all, which allowed them to break into the quarters. They kept on improving into the semis and final, supporting one another throughout. It was a hard-fought win."

Tanglin students join the Scholars Society in Year 8, and within this 2-hour, weekly enrichment CCA they gain exposure to various disciplines including World Scholars Cup (currently on hiatus due to the pandemic), NAQT quiz bowl and debate. Rohan, Krishiv, Adam, Jamie and Vishnu only began training together as a team a few months ago, but had already proven their encyclopedic general knowledge through the NAQT quiz bowl – there is no googling allowed in debate...

"But what's most interesting about debate is the synthesis," explains David, "bringing together all that knowledge and weighing up its relative importance to apply it to arguments in a persuasive way. It's very good training for a legalistic way of thinking – they have to prepare with the counter arguments in mind. It also has the human interaction side, an element of luck, and the human bias of the judges."

Singapore has a formidable history and reputation in debating, with the Raffles U14 competition fielding local and international teams of the highest calibre. To meet the standard in the timescale was a tall order, and the team's practice sessions included the military-sounding disciplines of debate drills and sparring (a run through of either a prepared or impromptu motion with a shadow team or teammates). But there is a lighter side too, Debate Popcorn is a drill with no formal debate structure or teams, where speakers pop up to say their piece, or to reply, much like the freedom of a Quaker Meeting House.

World Schools Style (WSS) debating is, however, highly structured – there are specific roles and positions for speakers and each speaker has a set of criteria they need to satisfy, as the team explains:

"In my role as team captain, I had the job of ensuring everyone contributes, deciding on the team for each debate (with Mr Sheppard), and ensuring the preparation and debate remains on track without hindrance to the process. For the impromptu debates, you really need to make the best use of the hour prep, manage the team carefully and keep a very calm head. Beyond this, I also contributed as the third speaker." Rohan Sarma, Team Captain

"I played the crucial role of first and last speaker. I contributed by starting off our case with a bang, listening carefully to our opponent's points and, after we expounded on our points, wrapping up our case to leave a lasting impression on the judges. We had five impromptu debates, and for these we received just one hour for preparation. It was a scramble to get our points in order and frame our speeches. I helped manage our time, calm frayed nerves, and establish common ground amidst conflicting opinions." Krishiv Kukreja, First and Last Speaker

"I generally took the role of the second speaker during debate. This role included rebutting the points of previous speakers on the other team, adding to our points and solidifying the points made by the first speaker. When I sat out, I helped the team prepare and took notes." Adam Khan, Second Speaker

"I took on the role of second speaker, sharing the role with my teammate Adam Khan. Throughout the debate competition, we allowed each other to take on the motions we felt most comfortable with. Because we took turns and had the same role, we worked closely together, helping to develop the active speaker's points. I mainly spoke in impromptu debates, where there is a short amount of time to develop our points and speeches, so we all had to work together to create the best possible argument to win." Jamie Adams, Second Speaker

"I helped the team by coming up with points and rebuttals. This was my first debate competition, and I must admit that I couldn't have been with a better team for the experience. I had a lot of fun seeing the debates – it was also challenging – but I think I really helped the team." Vishnu Deepak, Reserve Speaker

How did the roles come together with such effect in the final? Adam explains: "Krishiv, our first speaker, gave us a formidable start and a platform to build on. I, or Jamie, solidified our case; Rohan, our third speaker, tore apart counterpoints made by the opposition and sealed our victory; then Krishiv really finished off our case in his reply speech. When I heard we had won, I was extremely happy and proud of the team. As speakers, two of us placed in the top five overall, and I felt honoured to be named the best speaker in the Grand Final. It was great to feel that our hard work had paid off."

For all the adversarial elements of debate, each member is keen to point out that it was the bonds that formed between them, and the learning curve they went through during practice and competition, that inspires them. The youngest team member, Jamie, wraps up here with his perspective:

"This was only my second debate competition, and being the youngest by a year, it was an incredible learning experience. From my teammates, I learnt how to construct arguments, tips and tricks for speaking, and how to develop points. The judges also gave helpful feedback on what we did well and what to improve, so we knew what to work on.

"The harder elements to debate include having to think on your feet, for example responding to an opponent's point of information (POI) on the spot, but this is also part of the fun. Overall, I really enjoyed the experience, from the despair after losing the initial two debates, to the rush of excitement from winning. I had lots of fun working and joking with my teammates, and made some very good friends. I can't wait to debate with them again."