Music Around the World Concert 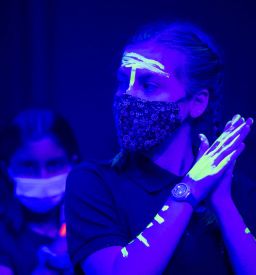 Even though we are confined to Singapore at the moment, that doesn't stop us from travelling virtually. With the help of more than 350 musicians, Tanglin's Senior Ensembles Music Around the World online concert takes a fascinating musical journey across the globe, with student presenters as tour guides. To view the concert, please click on the video below.

Stopping first at Hungary, with the Chamber Orchestra performing Beethovan's Rondo a Capriccio, the performances travel through South Africa, Asia, South America, Europe, the Middle East and the Caribbean before arriving back in Singapore for a beautiful solo vocal performance of Majulah Singapura from Felix Gulston.

Interspersed between mixed-year Senior Ensembles – including two choirs and two orchestras as well as a Sinfonietta, Guitar Group and Big Band – are Year 7 class ensembles whose performances are a culmination of their world music unit from the first half of Term 1. In this short space of time, each Year 7 class worked together on a piece that involved world music instruments, such as the Javanese gamelan or Jamaican steel pans, and world music styles, such as the body percussion piece originally created for the BBC proms.

"Performing in the Senior Ensembles Concert was a great experience. Through the process I got to know and talk to people I have never met before. I really enjoyed learning new compositions, from classical music to body percussion! Maintaining social distancing and wearing masks changes how the performance looks and feels, but despite Covid-19 and all its restrictions, I feel like we have done a fantastic job!"

The ensemble leaders selected the vibrant musical programme by shortlisting world music scores available for each group, and then ensuring that the colour, energy and traditions of a range of countries was captured across the final choices. The result is an enchanting journey through classical, traditional, folk and popular styles including the famous Argentinian tango Por Una Cabeza, which has featured in movies such as Scent of a Woman, Schindler's List and True Lies; the traditional Ottoman Misirlou immortalised by its use in Pulp Fiction; the contemporary Something in the Way by Jorja Smith, given a captivating interpretation by the Big Band; and the haunting Senior Choir medley of British and Irish Folk Songs compiled by Head of Senior Music, Helen Owain.

"The concert was very much a team effort with staff from many different areas of the school helping out," comments Helen. "The Music Department worked very closely together every step of the way, from the initial concept planning and choice of music, to drawing up rehearsal and recording schedules – everything had to be meticulously planned."

With so many aspects of the concert impacted by this year's restrictions, the team had to come up with alternatives to the usual ways of performing, as Helen explains: "Junior School members of the new Sinfonietta ensemble recorded their parts individually to include in the performance later, choir students had to rehearse online and also record parts separately – not an easy task! From the Year 7s to the Year 13s, they have shown great resilience and perseverance, pulling together to produce highly enjoyable performances in difficult circumstances."

"Each year the Tanglin Senior Music Ensembles Concert is a highlight of Term 1. However, due to COVID-19, the many rehearsals that we usually have in preparation of the concert took place over video call. This certainly challenged the choirs and tested our ability to work individually. We also had the opportunity to record our singing in the Recording Studio in the Music Department, which was something many of us hadn't done before. In spite of the situation, I really enjoyed being involved in the Senior Music Ensembles Concert."

The Music Department would like to thank other departments for their support and contributions: the Music Admin Team and Technicians, The Film Department, Senior Leadership Team, Year 7 Team, Theatre and Events and Marketing and Communications Team. The external videographer and virtual choir company were also instrumental in creating Tanglin's first virtual Senior Ensembles concert of this kind.