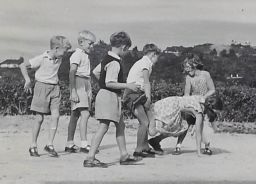 With a 95-year history, our Tanglin community is fortunate that lessons learnt in the past have helped us to grow, adapt and respond to challenges in the present. Did you know there were at least four other epidemic hiatuses in the school's history?

Tanglin's experiences of polio in the 1940s, SARS in 2003 and H1N1 in 2009, all serve as reminders that the novel coronavirus is not as unprecedented as it might seem. This in itself might bring some comfort, but when we are all in need of some good news stories, the positives that came out of these past challenges might also give (comfort) food for thought...

While the world was teetering on the edge of WWII, another grave threat was gathering force across Singapore and Malaya. Sporadic cases of polio that were reported in the 1930s spiraled into two larger outbreaks in the 1940s, causing school closures in the region.

In 1941, our Cameron Highlands Boarding School closed due to the epidemic, and remained closed during the WWII occupation. Tanglin alumna, Dorothy (Webber) Weigall, who attended CHS 1940-1941, remembers:

"We finished school early in November 1941 because of a polio outbreak, and shortly after that the war started in Malaya with the fall of Singapore on 14 February 1942."

Mrs. E. M. Turner, who was a teacher at Tanglin's Cameron Highlands School from 1939-1941, also remembers the epidemic in a diary she wrote during her wartime internment in Sumatra. This diary is now in the Documents Department of the Imperial War Museum and was used as a basis for the TV series Tenko:

"[...] breaking out just before the evacuation of Cameron Highlands, there was a terrible tragedy, in no way connected with the war, but its repercussions collided with the invasion of the Japanese: this catastrophe had been the outbreak of a polio epidemic[...] We had all been obliged to go into quarantine. I am only briefly touching on these tragic days, since they were irrelevant to the war situation. The one and only 'iron lung' in the whole of Malaya, was rushed to Batu Gadju Hospital, but was too late to save the life of [the] first girl."

The Straits Times, in a bulletin reminiscent of recent COVID-19 updates, reported the school's reopening on 10 June 1948: 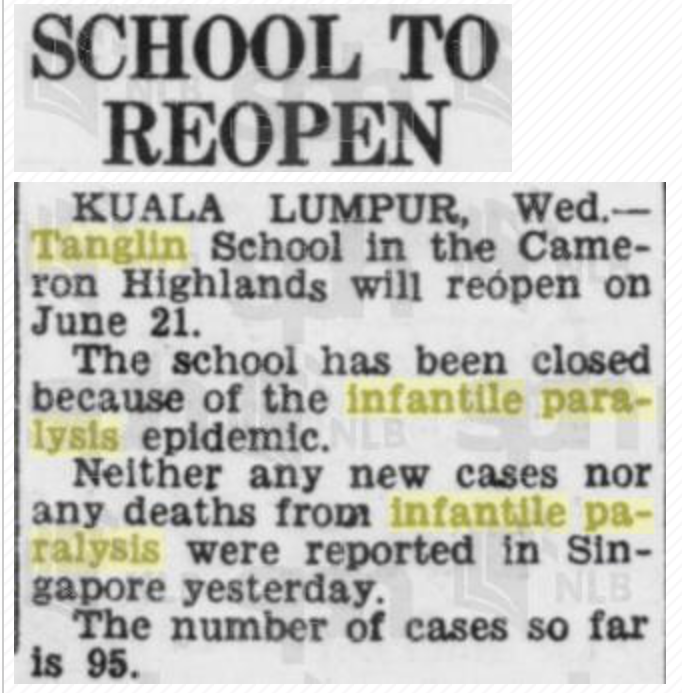 "Tanglin School in the Cameron Highlands will reopen on June 21. The school has been closed because of the infantile paralysis* epidemic. Neither any new cases nor any deaths from infantile paralysis were reported in Singapore yesterday. The number of cases so far is 95."

On 22 July 1948, another bulletin from The Straits Times records how health screenings and travel bans were used to prevent the spread of infection, just as they are today: 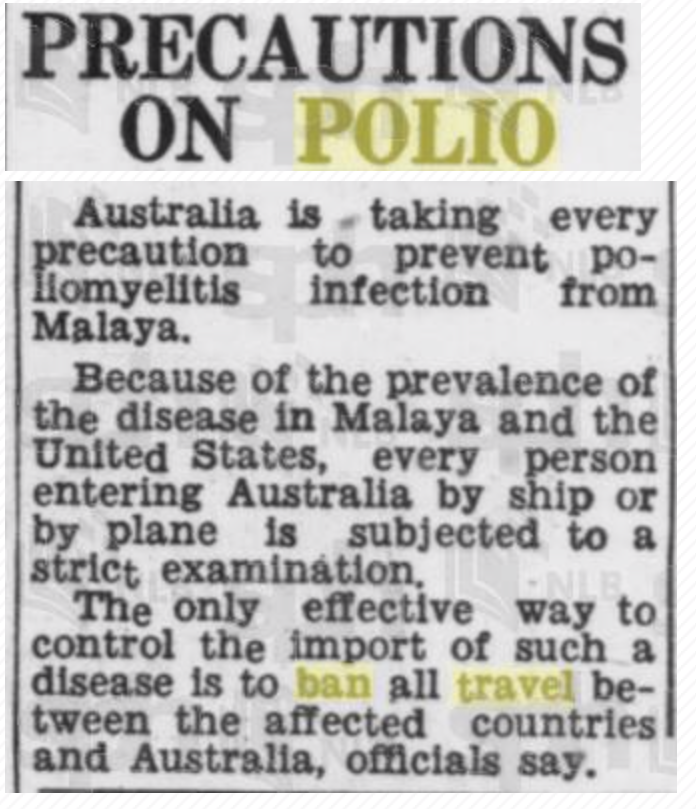 "Australia is taking every precaution to prevent poliomyelitis infection from Malaya[...] every person entering Australia by ship or by plane is subjected to strict examination. The only effective way to control the import of such a disease is to ban all travel between the affected countries and Australia, officials say."

The polio epidemics that occurred in the first half of the twentieth century, and into the 1950s, irreparably altered the lives of survivors, but they also brought about profound medical and cultural changes.

Intensive care medicine has its origin in the fight against polio.*1 Most hospitals in the forties and fifties had limited access to 'iron lungs' for patients who were unable to breathe without mechanical assistance, as reported first hand by Mrs. Turner, our Tanglin teacher. Respiratory centres designed to assist the most severe polio patients (first established in 1952 in Denmark by Danish anesthesiologist Bjørn Ibsen) were the precursors of modern intensive care units. A year later Ibsen would establish the world's first ICU.*2

Polio not only spurred developments in ICU – crucial in treating severely ill patients in the current pandemic – the vast community of disabled polio survivors propelled the development of rehabilitation therapy, and advanced the disability rights movement.

"Society grows great when old men [and women] plant trees whose shade they know they will never sit in." 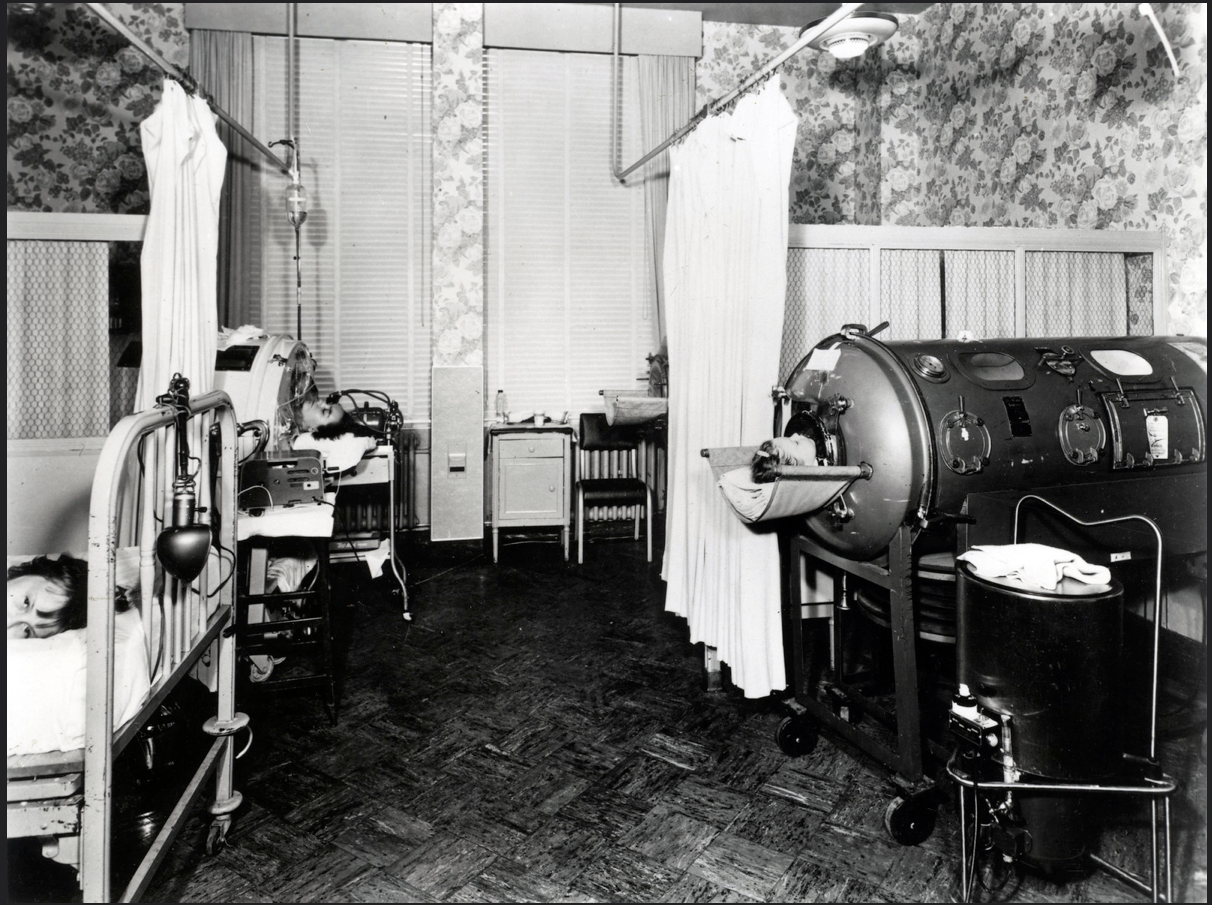 Next week, look out for our follow-up article on Epidemic Experiences, which features lessons learnt from SARS and H1N1.

*1 "Louise Reisner-Sénélar (2009) The Danish anaesthesiologist Björn Ibsen a pioneer of long-term ventilation on the upper airways".