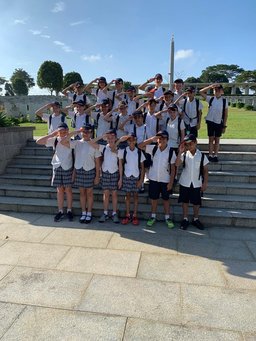 Last week, Year 6 students visited the Kranji War Memorial and Cemetery as part of their learning on World War 2. Focusing on Japan's invasion into Singapore and Malaya, children reflected on many aspects of the war in Singapore and the Asia Pacific.

The children were tasked with finding the gravestones of men who belonged to the Cambridgeshire Regiment. Using a map of the cemetery they located eight soldiers. On their worksheets were photographs of each soldier. Using information on the gravestones, the children recorded the soldier's age and date of death. They also reflected on the meaningful messages left for the soldiers by their families.

Finding a peaceful spot with a view of the cemetery, the children then took a photograph and described what they could hear and the poetic words and phrases that came to mind.

This poignant trip provided children with the opportunity to gain a better understanding of the people who fought and sacrificed their lives for others. It also supported their learning, particularly in English and Humanities classes, where they are writing fictional diaries and letters, and creating poems on the emotions of war.

"When I first arrived at Kranji War Cemetery I felt calm, but when I started to realise what had happened to the people buried there, I became quite emotional. As we studied the headstones, I was surprised how young people were; the same age as some of the Year 6's siblings. Kranji was a quiet place to reflect on how lucky we are and how willing people were to do something for their country." Elina

In addition to the trip and classroom learning, Year 6 hold a VE/VJ Day where each student wears a costume reflecting the typical clothing of a child or adult in 1945. They play some VE/VJ Day themed games for PE and enjoy a street style party with jam tarts, marmite sandwiches, sausage rolls and cakes and jellies! This is a wonderful way to celebrate the children's learning in Term 2!